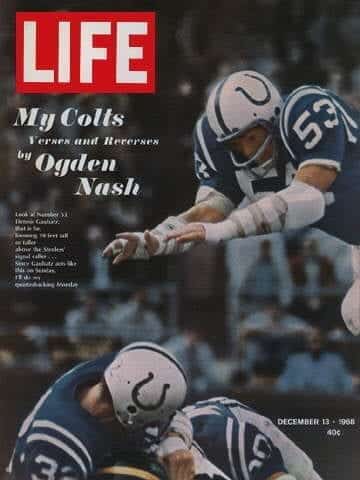 Pg… 22A Letters to the Editors

Pg… 22B The Feminine Eye: The Best First Lady. By Shana Alexander

Pg… 26 A Scenario of Spies: A Strange Wave of "Suicides" and Arrests Indicates Security Trouble in NATO?and in Soviet Intelligence Too. By Philippe de Vosjoli. A Turk with a Thirst for Scotch and Secrets. By Miguel Acoca

Pg… 32 On the Newsfronts of the World: Lady Jockeys? Who Needs 'em? "They'll Find Out how Tough it is and Then They'll Give Up." By Bill Hartack

Pg… 32 On the Newsfronts of the World: A Frightful Way to Treat a Future King

Pg… 43 Close–Up: Producer David Merrick is an Imp in a Monster Mask. By Dick Schaap

Pg… 69 Space: Escape Routes from a Rocket in Trouble

Pg… 75 My Colts by Ogden Nash: Verses and Reverses by a Football Buff from Baltimore. Photographed by Arthur Rickerby

Pg… 82 Search for a Black Past: Part IV: A Separate Path to Equality: The Spokesmen Shift from Moderate to Militant?and Eloquent Black Voices from the Past are Heard