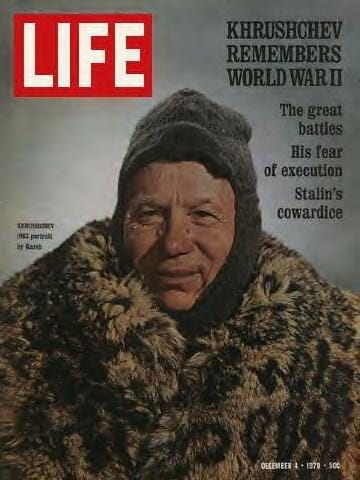 Pg… 36 Memories of Divided Families: A Daring Raid Fails to Rescue American POWs in North Vietnam, and the Wives Whose Anguish Inspired the Attempt Talk About Their Lives Alone. How the Raid was Planned, by Hugh Sidey

Pg… 44 A Tale of Two Quarterbacks: Daryle Lamonica Gets the Early Points and George Blanda Gets the Win?for Oakland. By Bill Bruns

Pg… 48 Part II of a Major Four–Part Series Khrushchev Remembers 'The Great Patriotic War': The Former Soviet Premier Tells of Days of Disaster, the Final Victory and Makes a Surprising Admission: "We Must Give Credit to the Allies." More Hitherto Unpublished Pictures

Pg… 6 Departments: The Presidency: The Casting–Out of Wally Hickel. By Hugh Sidey

Pg… 77 Departments: Parting Shots: Will it be a Cold Winter?