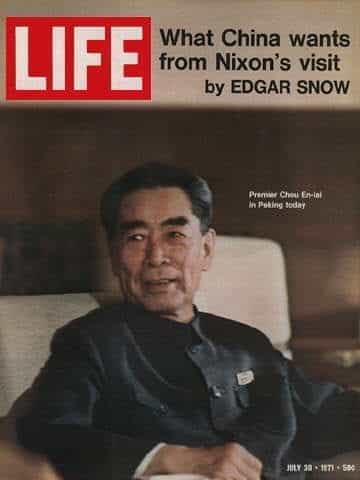 Pg… 20 Peking's View of the Nixon Mission: China Will Talk from a Position of Strength. The American Journalist Edgar Snow Writes About the President's Visit Out of Long Personal Knowledge of China's Leaders

Pg… 28 The Bicycle Madness: As Sales Boom, Millions Discover Fresh Horizons Through the Power of the Pedal. My New Best Friend is a Bile–Green Wheel. By Loudon Wainwright

Pg… 38 Destroying the Germs of War: The U.S. Finally Begins to Dismantle Its Biological Arsenal

Pg… 50 The Tempting of a Small Town: An Old Rhode Island Community Faces a Familiar Modern Dilemma: Whether to Welcome a New Industry or Preserve the Land and Bay. By Roger Vaughan

Pg… 58 Which Face is Fellini?: The Director/Cartoonist Who Filmed "The Clowns." By Dora Jane Hamblin

Pg… 6 Departments: The Presidency: The Secret of Lincoln's Sitting Room. By Hugh Sidey

Pg… 10–16 Departments: Reviews: Max Wilk's "The Wit and Wisdom of Hollywood" is Reviewed by Aaron Latham