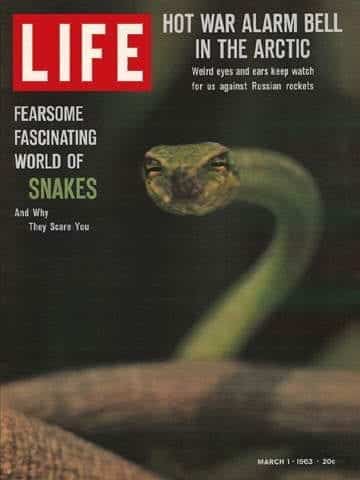 Pg… 4 Editorials: How to Rescue the Tax Cut

Pg… 4 Editorials: Can a Strike be Broken?

Pg… 16 Letters to the Editors

Pg… 18 War Watch in the Arctic: As Canada Debates Defense Commitment, Our Sentinels Guard Against Russian Attack on a Forbidding Terrain. Photographed and Written for LIFE by Carl Mydans

Pg… 34 The Case for De Gaulle: The French President Ignores an Assassination Plot and His Allies' Anger to Press for Objectives He Considers Valid. By Gene Farmer

Pg… 37 Strange World of Snakes: In Extraordinary Color Photographed by Nina Leen, the Reptiles Live, Grow, Shed Their Skins, Spit Venom and Eat Each Other. And Why are We so Afraid of Snakes?

Pg… 60 $40,000 a Word: That is What the Title of Sex and the Single Girl Gets for Its Author, Helen Brown. By Shana Alexander

Pg… 75 Socko U.S. Fashion Pair: New Collections Put Galanos and Norell on a Par with Any Designer in the World