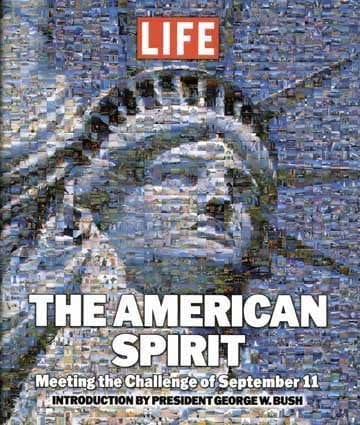 LIFE: The American Spirit, Meeting the Challenge of September 11

September 11, 2001, began a new area in United States of America. The attacks on New York City and Washington, D.C., and the courage exhibited in those cities and in the skies over Pennsylvania, changed forever the way Americans view their security and their countries place in the world. Shortly after the fateful day, the editors of LIFE created a book on the attacks and their immediate aftermath. The goal of that volume, ONE NATION: America remembers September 11, 2001, was to be a photographic and narrative record of the day, and the book was praised in reviews and editorials. The volume you hold in your hands, THE AMERICAN SPIRIT, aspires to pick up where that book left off. In the tradition of classic LIFE picture stories, the patriotism–and the tension–that has swept the country is memorably evoked. A small church spared by the calamity at Ground Zero finds its missionary cause. The legacy of a pilot from a rural town endures on his farm, which continues to yield produce for the poor. LIFE revisits several survivors of September 11, whose stories were told in ONE NATION, and finds both anxiety and resilience. President George W. Bush contributes a moving introduction to THE AMERICAN SPIRIT, which also includes new essays by David McCullough, Melissa Fay Greene, James Bradley and others. Gordon Parks provides new poetry and photography. Other noted photographers whose work is exclusive to this book include Harry Benson, Joe McNally, James Salzano, Abigail Seymour, Steve Simon, Shannon Stapleton, David Turnley and Dennis Waugh. The singular record of Greg Brown, who documented the recovery of the World Trade Center site for eight months, is presented here for the first time. THE AMERICAN SPIRIT is about the country’s bold effort to rise to the challenges of this new era. It is a volume that will resonate for generations to come..