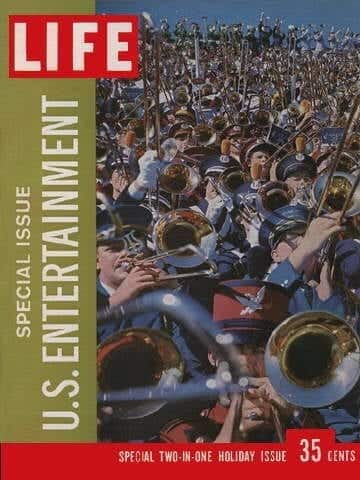 Pg… 37 Rock N Roll Rolls On: The cult of rock n roll, led by boyish idols like Dick Clarke and deliriously joined by millions of youngsters, make and ever and noisier impact on the musical scene

Pg… 44 Film History In Making: The story of how award–winning director George Stevens films the classic, The Diary of Anne Frank, is told in photographs taken on the set and in Steven's own words

Pg… 57 Transcontinental TV Gag: How people all over react to one Sullivan show joke.

Pg… 64 When Jazz Was Young: Paintings by Morton Roberts and vivid recollections of old–time musicians evoke days when America's own art form was born in New Orleans and rode north of the river.

Pg… 82 The Amazing U.S. Theater: At. It always throws the formula way by Walter Kerr.

Pg… 97 The Master of Ballet: Finest choreographer in the world, George Balanchine is adept at both classical and popular ballet–an insight into his home life and his creation of an earthly number

Pg… 109 Ebullient Dean Martin: A blue–Chip Starr, who slaves at seeming relaxed, makes millions a year and has a fine time at work and at play, often with members of the group described in next article

Pg… 122 Stage–Struck Texas: Amid a nationwide boom in local drama groups, Texas is the most actively theatrical of states, producing everything from historical pageants to cowboy Shakespeare.

Pg… 137 'LIFE's' Christmas Package: Acting exclusively for life, in a performance for one issue only, leading stars of today appear in some of the best–remembered roles and acts of yesterday. In a stunning feat of re–creation, Marilyn Monroe mimics five fabulous enchantresses of the past. Her playwright husband adds a warm and perspective commentary. Then a whole covey of Hollywood's biggest young stars cut up in Saved at the Altar, their own version of old Max Sennett slapstick

Pg… 159 Top Show People: Photographs and pinpoint studies of 42 ranking performers and creators who are at once the sole, spirit and sparkplug of the entertainment world.

Pg… 171 A Triumphant Verse Drama: MacLeish's J.B., which likens modern man to Job, is called "one of the memorable works of the century"

Pg… 177 Sound All Around: Photo diagrams and explain what makes the stereo listener feel he is sitting in the middle of the orchestra

Pg… 188 The Girls Backstage: Statuesque nightclub beauties in unguarded moments before they step out before the customers

Pg… 193 A Comic Trial By Ice: Carol Channing in zero Richard stumble (on skates) through a television spectacular rehearsal.

Pg… 196 At Christmas, Kids In The Act: Troupe of first–graders staged a visit from St. Nicholas and an issue with: "and to all a good night"