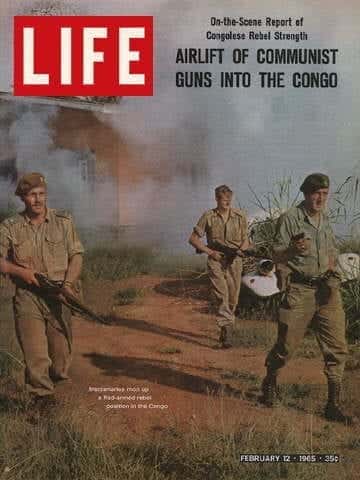 Pg… 4 Editorials: Foreign Aid is for Help?Not for Cheers

Pg… 23 Letters to the Editors

Pg… 25 The Feminine Eye: The Tarnished Buttons. By Shana Alexander

Pg… 26 Arming the Congo Rebels: A Massive Airlift of Russian and Red Chinese Weapons Bolsters the Murderous Simbas and Poses a Dilemma for the U.S. LIFE Correspondents' Eyewitness Reports of the Build–Up

Pg… 41 Resurrection of an Ironclad: The Yankee Gunboat Cairo Sunk at Vicksburg is Raised from the Yazoo River

Pg… 48 Private Life of Primates: Part One of a Two–Part Series Reveals the Surprising Facts Science has Discovered About Apes and Monkeys and Their Social Life

Pg… 63 Interview with Sukarno: He Wants His People to be Steeped in Struggle. By Thomas B. Morgan

Pg… 68 Cadet's Story of Cheating Scandal: An Air Force Cadet Involved in the Mess Gives His Views on Why and How It Happened: The Honor Code Became a Joke

Pg… 74 Bill Zeckendorf's Troubles: The Real Estate Giant is on the Thin Edge as His Grand Plans Go Blooey. By Chris Welles

Pg… 89 Fake Hair Flattery: More and More Women Go for Tack–On Tresses and a Smart Girl Can have Many Pretty Heads

Pg… 93 Young Cassidy: A New Film is Based on the Turbulent Life of Sean O'Casey

Pg… 97 Cassius on the Big Fight: "The Hare was no Rabbit," Says Muhammad Ali as the Heavyweight Champ Writes His Own Report on the Patterson–Chuvalo Contest