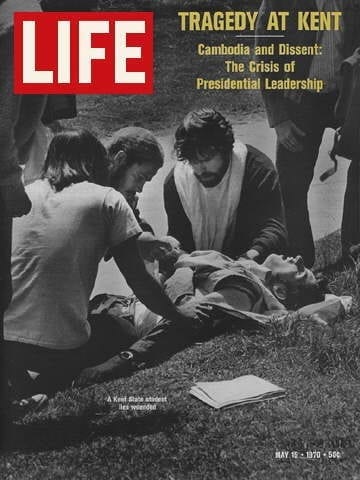 Pg… 28 Crisis for Nixon The Cambodian decision raises doubts about presidential leadership. By Hugh Sidey. Dissent leads to horror at Kent State. A boy who was "there to watch and make up his mind." By John Pekkanen. Why it didn't happen at Yale, by John K. Jessup

Pg… 45 A World All Their Own Retirement communities like Sun City are sheltered but lively places for the aged. "You make so many friends here," by Paul O'Neil. Photographed by Ralph Crane

Pg… 61 Lloyd Bridges & Son The actor and his actor son talk their way across the generation gap. By Joan Barthel

Pg… 4 Departments: Column On a sailboat of sinking water. By Barry Farrell

Pg… 12–22 Departments: Reviews Elliott Erwitt's photographs at the Smithsonian, reviewed by Sean Callahan? Albert Goldman on three books about campus revolution… The videotape explosion, surveyed by Richard Freedman 26a: Letters to the Editors

Editors' Note… I assumed they were shooting in the air' Often, when big news breaks unexpectedly, we rely on amateur photographers for coverage. This week, for example, the cover and most of the photographs in the lead story are the work of three Kent State University students, all camera buffs, who were within a few yards of the Ohio National Guard when it opened fire on student demonstrators last week. John Filo is 21 years old and a journalism senior at Kent State. On the day of the shootings he had borrowed a camera from the school yearbook, and when the gunfire began he was to the left and in front of the troops. "I was just standing there," he says, "taking pictures, watching things through the viewfinder. I thought they were firing blanks. Then I saw bullets smashing into a metal sculpture in front of me, and one guy just pumping away with a .45 pistol. A bullet whizzed right over my head and another hit a tree. That's when I dropped my camera." Filo took the big picture on pages 30, 31. John Darnell, also 21 and a journalism senior, had an ancient camera, an expired press pass, and only one roll of film, but found he could move around easily, almost casually, to within 25 feet of the Guard lines. "Just before the shootings I saw a girl I knew, Sandy Scheuer, and I waved and she said 'H i.' Then it started. I don't really remem her being scared, it all happened so fast. I saw people lying on the ground, and then I realized they had been shot. Later I found out Sandy was dead." His picture appears on pages 32, 33. Howard Ruffner, whose photographs are on the cover and on pages 34, 35, was actually on assignment for LIFE. That morning our Chicago bureau had telephoned the school newspaper and asked if anyone could cover the day's demonstrations. Ruffner, 24, who had learned photography during a four–year hitch in the Air Force, was available. "I was standing to the right of the Guard when the shooting started," he recalls. "I assumed they were shooting in the air. I couldn't believe they'd shoot into a crowd. Suddenly I understood and dropped to the ground?right on top of my cameras. In a few seconds it was over and I began to photograph the wounded and dying. People kept saying, 'No pictures, don't take any pictures,' but I had to. I knew pictures were the only way to tell this story."