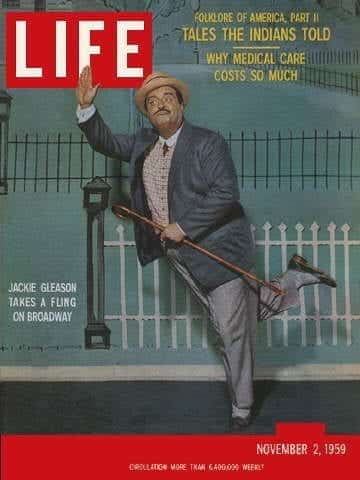 Pg… 10 OTHER DEPARTMENTS Speaking of Pictures: a diverse gallery of T.R. roles

Pg… 12 OTHER DEPARTMENTS Letters to the Editors

Pg… 16 Football as nobody sees it A classic football game is uniquely photographed and reported?the whole drama of the locker rooms, coaches' working diaries, the moods of players in victory and defeat.

Pg… 16 THE WEEK'S EVENTS Taut drama behind a football classic: the game that nobody saw. Photographed for LIFE by Robert W. Kelley and Stan Wayman

Pg… 31 THE WEEK'S EVENTS A farm town's haunting sense of guilt: trial and verdict keep Vermonters wondering who among them is a murderer

Pg… 66 PICTORIAL ESSAYS Folklore of America Part II: the lively legends of the Indians. Paintings for LIFE by James Lewicki

Pg… 82 ARTICLE The challenge of mounting medical expenses: conclusion of "You and Your Doctor" tells how costs of personalized care and new techniques have climbed but may be brought down. By Ernest Havemann

Pg… 82 Rx for medical bills A painful problem of U.S. medicine?the high price of getting sick?is diagnosed in Part IV of "You and Your Doctor," and remedies are prescribed.

Pg… 105 PICTORIAL ESSAYS Algeria's siege of anguish: a futile war of ambush and pursuit goes into the sixth bloody year. Photographs and text by a native son, John Phillips

Pg… 105 Algeria, seen by a son As the long war in Algeria saps the West, Algeria– born John Phillips?the author of Odd World?reports on his former homeland's need for peace.

Pg… 117 THEATER O'Neill's Ah, Wilderness becomes a musical and Jackie Gleason is right at home in this version of a classic American comedy

Pg… 128 OTHER DEPARTMENTS Miscellany: young critic of artistic slip : COVER Up from TV, Jackie Gleason dances while singing the title song from his new Broadway musical Take Me Along (see pp. 117–122)