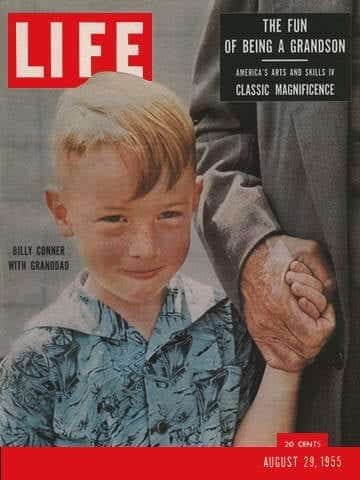 Pg… 31 THE WEEK'S EVENTS: A Moral Mandate for all Americans: A Grim Court–Martial Illustrates the Ned for the New Code of Conduct Just Issued by the President. Drawings for LIFE by Arthur Shilstone

Pg… 42 THE WEEK'S EVENTS: The Citizens of Vevey, Switzerland Salute Their Fine Wines with a Fortnight of Pagan Pageantry

Pg… 47 THE WEEK'S EVENTS: Gaily the Japanese Launch a Ship?with Some Delay

Pg… 58 PHOTOGRAPHIC ESSAYS: The Magnificent Greek Revival: Part IV in LIFE'S Series on America's Art and Skills Describes How a Prospering Country Turned to the Classic Style of Ancient Greece for Its Architecture and Furniture. Photographed for LIFE by Fritz Goro

Pg… 99 PHOTOGRAPHIC ESSAYS: A Special Happy World for a Grandson: The Story of Little Billy Conner and His Warm Relationship with an Understanding Grandfather. Photographed for LIFE by Leonard McCombe

Pg… 71 THEATER: A Star–Studded Revival of Wilder's "Skin of Our Teeth," Now on Broadway, Will Open the Fall Battle of TV Spectaculars

Pg… 115 NATURE: Tree Frogs on a Trapeze: Florida Pets Do an Aerial Act

Pg… 121 SCIENCE: Checkup on Channelers: U.S. and British Doctors Try to Find Out What Makes a Good Endurance Swimmer

Pg… 7 OTHER DEPARTMENTS: Letters to the Editors