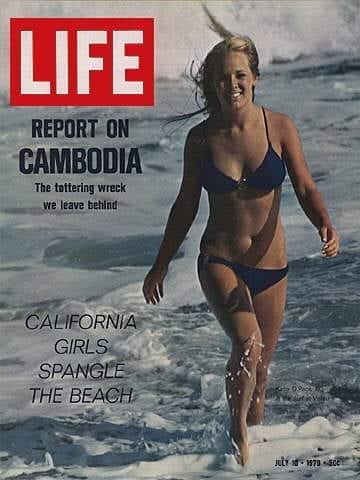 Pg… 23 Cambodia: The Wreck We Leave Behind: U.S. Fighting Men have Gone and Cambodians Must Cope not Only with the Communists but with South Vietnamese and Thais. Meanwhile, the Quiet American Presence Begins to Grow. A Report by John Saar

Pg… 34 Record–Breaking China Doll: A Pretty Track Whiz from Taiwan has Lost Only Two of Her Last 121 Races

Pg… 36 The Mop Comes Back: The Renaissance of a Hairy 16th Century Dog

Pg… 41 The Godfather's Father: Author Mario Puzo Can Afford to Live It Up at Last. Photographed by Bob Peterson

Pg… 54 Parole Board: When Convicts Plead for Early Release, Three Good Men with Little to Guide Them Must Answer "Yes" or "No." By Donald Jackson

Pg… 66 An Extra House To Play In: The Cost of New Vacation Homes is Lower than You'd Think

Pg… 4 Departments: The Presidency: Flickers of Hope in the Heat. By Hugh Sidey

Pg… 22A Departments: Letters to the Editors

Pg… 72 Departments: Parting Shots: Where She Stops Nobody Knows