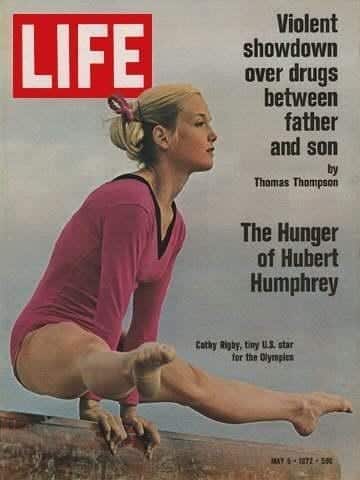 Pg… 40 The Man Who Swindled Akron: Lawyer Don Lowers Invited His Friends to Get Rich Quick. It Cost Them $11 Million. By Dale Wittner

Pg… 49 Whose Children Are Mike and Tammy?: The Search to Identify Two Youngsters Abandoned in Long Beach, Calif.

Pg… 52 Hubert Humphrey Still Wants It All: Buovant as Ever, H.H.H. is Running Hard for Everybody's Vote. By Brock Brower. Photographed by John Olson

Pg… 58 A Drug Tragedy: The Nightmare Story of a Father Who Loved His Son but Hated what His Son Became. By Thomas Thompson

Pg… 74 Craze for Quilts: An Old Art Comes Back in All Its Brilliance

Pg… 82 The Littlest Olympian: Tiny Gymnast Cathy Rigby is Reaching for a Gold Medal at Munich. Photographed by John Dominis

Pg… 22–28 Departments: Reviews: Cyclops on a TV Show About Radio?the Comics of the '40s

Pg… 37 Departments: Letters to the Editors