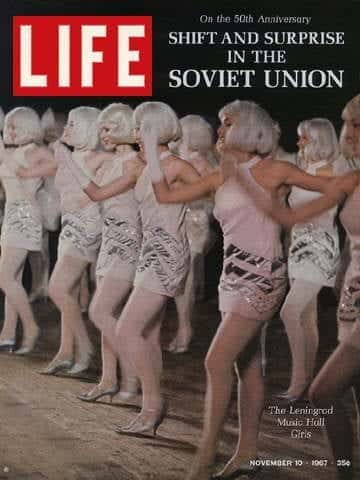 Pg… 24A Opinion and Comment: Letters to the Editors

Pg… 26 Opinion and Comment: The View from Here: Inviation to Instant Bliss. By Loudon Wainwright

Pg… 28 The Week's News and Features: Coronation of the Shah: In Iran, a Monarch Assumes a Well–Earned Crown and Makes His Wife the First Empress

Pg… 34 The Week's News and Features: On the Newsfronts of the World: In Rome and London, the Cadence of Two Events of Pomp and Pageantry.

Pg… 38 The Week's News and Features: Senate: A Reply to the Senate Ethics Committee's "Vindication" of Senator Long. By William Lambert

Pg… 42 Special Section The Forces of the Future in the Soviet Union: Youth: Hip and Critical: "We Want to Live Our Own Lives," They Say. Photographed by Bill Eppridge. The Battle of the Generations Comes Into the Open. By Peter Young

Pg… 60 Special Section The Forces of the Future in the Soviet Union: Management: Looking for Profits: Business Bosses Sidestep Marx in Order to Get the Economy Moving

Pg… 70 Special Section The Forces of the Future in the Soviet UnionThe Intelligentsia: Intellectuals Stir Up a Ferment of Ideas and Arguments. By James H. Billington

Pg… 86 Movies: On the Set with Norman Jewison. By James Lipscomb

Pg… 99 Music: Down Home with Bobbie Gentry. With a Gusty Voice and a Grim Song She is an Instant Hit

Pg… 107 Space: Satellite Sends Back First Color Portrait of an Angry Earth, Roiled Up by Hurricanes

Pg… 108 Fashion: Garters: a Snappy New Bit of Leg Art for the Ladies. For Men, Turtlenecks Come in from the Cold