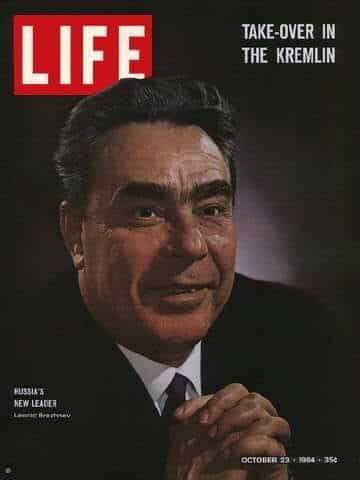 Pg… 27 Letters to the Editors

Pg… 29 The Feminine Eye: The Womanly Art of Self–Defense. A New LIFE Column by Shana Alexander

Pg… 30 Khrushchev Era Ends: In a Sudden, Secret Move, Russia's Leader is Deposed and His Power is Taken Over by Two of His Prot?g?s. He Gave the World the Wildest Ride in the Park. By John K. Jessup

Pg… 43 Jenkins: Shocker in the White House: President Johnson's Longtime Friend and Aide is Arrested on a Morals Charge

Pg… 49 Pants for the City?: A New Fashion Starts a Controversy Among Sophisticates

Pg… 76B Olympics: A Many–Splendored Start: Reflections on a Tokyo Day Painted on Blue Silk. By John McDermott

Pg… 80 Anthropology and the Olympics: Scientists Ponder a Question: Do Physical Differences Among Races Give Some Athletes an Edge in Competition? By Marshall Smith

Pg… 86 The British Election: The Labor Party Narrowly Defeats the Conservatives and Harold Wilson will be the New Prime Minister

Pg… 88 Goldwater: Man Behind the Image: A Report in Depth Tells of the Rugged Tradition and Pleasant Life of the Republican Candidate. By Keith Wheeler and William Lambert