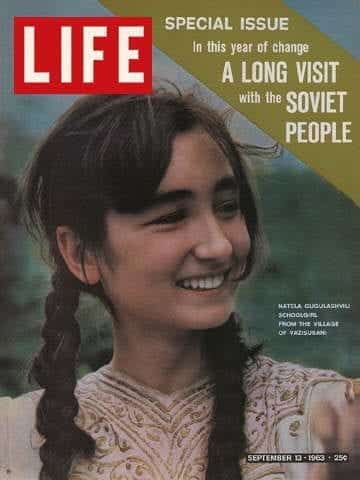 Pg… 4B Editorial: Why We Must Put Holes in the Iron Curtain

Pg… 22 LIFE Guide: How to Visit the Soviet Union?How to Get There, Where to Go, What to Expect. Sights on a Long Trip. Photographer Stan Wayman Traveled 10,000 Miles and Saw Everything from Roughriders to Sweet Girls

Pg… 31 Letters to the Editors

Pg… 34 The Biggest Story?Housing: Throughout the U.S.S.R. History's Biggest Boom in Prefab Apartment Construction is in the Works

Pg… 44 Items in the News in the U.S.S.R.: Huge Earth Mover Digs the Biggest Scoop. Comely Gymnasts Limber Up for the Olympics. Weekend Sportsmen Hold a Splashy Kayak Race

Pg… 44B High–Diving Seal: He Goes Head First Off the Rocks

Pg… 49 Rescue of a U.S. Flier: Soviet Fishermen Reel Him in Near Cape Cod and Record the Drama on Film

Pg… 81 Party and Government: How the Country is Controlled

Pg… 88B A Prospering Family: Meet Alexander, Eliena, Sasha and Natasha Lozovan of Moscow Who, by Russian Standards, are Affluent Upper Class

Pg… 100 Moffetts Go A–Moseying: An Editor Puts His Kids in a Soviet Camp and Takes a Trip Around the Country. By Hugh Moffett

Pg… 113 High–Fashion Designer: Slava Changes Things and the Ladies are Trimmer in His Styles

Pg… 123 Hosts with Most Toasts: LIFE Goes to Soviet Georgia and Samples Its Renowned Hospitality. By Robert Brigham

Pg… 128 Miscellany: As Ways Change, an Old Bird Hangs On