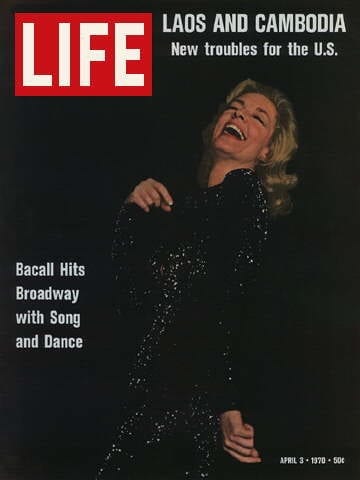 Pg… 30 Cambodia and Laos: Prince Sihanouk Falls from Power, the Communists Strike Out Across the Plain of Jars and Serious New Possibilities for U.S. Involvement Open Up in Southeast Asia. A Report from Laos by Hugh D. S. Greenway

Pg… 40 Memories of Big Country: The Cowboy was Right for His Time, but Times have Changed. "If You Wanted a Cowboy to Quit, You'd Just Give Him a Shovel," by Donald Jackson. Photographed by John Loengard

Pg… 54A Bacall Tries a Musical: A New Version of "All About Eve" is Called "Applause," and It's for Lauren. By Barry Farrell

Pg… 57 Mr. Bellow's Planet: Novelist Saul Bellow Considers the State of Art and of Life, a Close–Up by Jane Howard

Pg… 66 Inside Holy Loch: A Visit to a U.S. Polaris Submarine Base. By Richard B. Stolley

Pg… 4 Departments: The Presidency: The Return of Pocketbook Politics. By Hugh Sidey

Pg… 22A Departments: Letters to the Editors

Pg… 22B Departments: Column: The Repression in the Mirror. By Barry Farrell