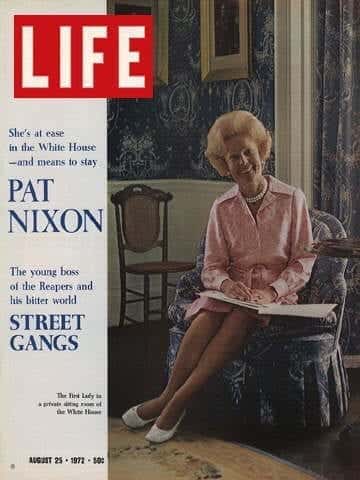 Pg… 2 The Beat of Life: The Great Wallenda, Still Flying. Soldiering in Northern Ireland. A Look at Olympic Park. Struggle with a Snake

Pg… 28 Pat Nixon on Her Own Home Ground: She is Mistress of the White House, and of Herself. Photographed by Harry Benson

Pg… 39 New Salvos on the War's Long Road: Amid a Flurry of Events and Arguments, a Controversial Visit to North Vietnam. What I Saw and Heard, by Ramsey Clark

Pg… 49 Fragile Genius of a Virtuoso: After 65 Years at the Piano, Claudio Arrau Finds Every Concert a Tormenting Encounter. By Roger Kahn

Pg… 69 Parting Shots: Jesse Owens: Still Cashing in on Those Four Gold Medals, by Bill Bruns. Jumping at a Chance to Feel Young. A Handsome Man is Like a Parody, the Mr. Adonis Contest Discovers

Pg… 24 Departments: 29 Years Ago In 'Life': Wartime Teenagers Were Jumping to the Lindy Hop