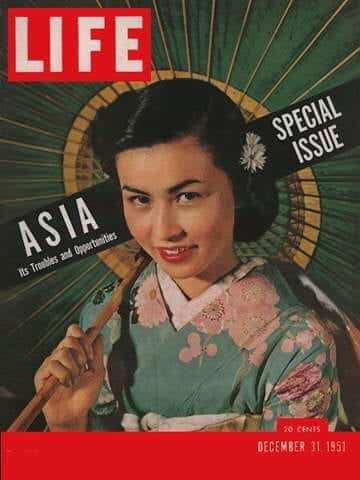 Pg… 5 Sprawled over one third of the world land, bright with beauty and scarred with poverty, birthplace of civilization–the subject of this issue, Asia, is pictured in map form in Three Views of Asia

Pg… 12 This issue is concerned with the implications of US policy toward Asia. But also with the people to whom Asia is a personal matter, the people who can answer the question Who Cares about Asia?

Pg… 14 In free Asia an American can still travel and see for himself. David Douglas Duncan went from Hong Kong to Abadan was everywhere impressed by the Decline of the Westerner

Pg… 16 Communist Asia, of course, is close to Westerners. But Robert Neville, reporting from Hong Kong, and some little seen pictures from China reveal what has brought about the Rise of the Red Star

Pg… 20 In the year of fighting the US has learned much about red China's army–makeup, power, tactical concepts, its Russian–backed drive to modernize. Many secrets are revealed in, This Is How Chinese Flight.

Pg… 24 On the editorial page 3 articulate Asians give expression to their views and their feelings about America. The editorial itself explains the position of the US, What Asians Think of US Policy and Why We Fight and Hope

Pg… 30 But Asia is not only war in trouble. Some of it is pure beauty and storybook romance like the city of spires and temples and scented marketplaces, Thailand's fabled capital of Bangkok.

Pg… 38 Asia cannot be understood solely by what the traveler sees. Its religions and philosophies are worlds away from the West, as explained by Yale's Professor Northrop in The Mind of Asia

Pg… 44 the Agent in Cultured Countries at Asian Produce Great Art. One of Its Landmarks, a 33 Foot Painted Scroll, Mirrors the Serene and Sophisticated Life of China 800 Years Ago, A Festival on the River

Pg… 50 a movie industry which produces more films that America stretches from Japan to India, competing with Hollywood, but imitating it, especially in the beauties it has crowned Film Queens of Asia.

Pg… 52 Americans are useful and welcome in Asia, particularly when they will get their hands dirty helping Asians–as Horace Holme's of Tennessee does. His story is told in A County Agent Comes to India

Pg… 54 4 summer months–and a wet wind that comes in over the land from the Indian Ocean mean feast or famine for the farmers of Asia. These are the months of the Life–Giving Monsoon

Pg… 56 For more than a hundred years US missionaries have faced danger in this comfort to carry gospel, health and education to the Orient. New member of this distinguished group is a Medical Missionary.

Pg… 58 One country at Asian and imitated the West more than any other in now. Intern is being imitated. Traditional art and design are influencing America, in some ways, as it follows The Example of Japan.

Pg… 70 Americans are appreciated by Asians. When they build things for them. This is handing in a primitive country whose government has hired the US firm of Morrison–Knudsen to create A New Era For Afghans

Pg… 72 the British Empire keeps a hold in Asia now. Not by use of vast power wielded by stiff colonial envoys, but by smart men in shirt sleeves, men like Malcolm McDonald, who is an Ambassador Extraordinary

Pg… 76 Ever present through the East is the Chinese merchant, scorned by people who use him, loyal to his homeland. James Michener tells how one family has become a world–wide power in Chinese Success Story.

Pg… 82 oil is Asia's greatest natural asset, and tiny Kuwait, where new discoveries have just been made, as the world's greatest poll. The West will more than make up for Iran's loss with Oil from a Sandy Sheikdom

Pg… 84 And Asia, whose people also have light hearts and bright imaginations, is a place which breeds love of fun and legends. The special issue ends on these notes with looks that The Beach of Passionate Love.

Pg… 88 And Asia, whose people also have light hearts and bright imaginations, is a place which breeds love of fun and legends. The special issue ends on these notes with looks that Abominable Himalayan : Cover Mitsuko Kimura 19, Lives in the Outskirts of Tokyo by David Douglas Duncan