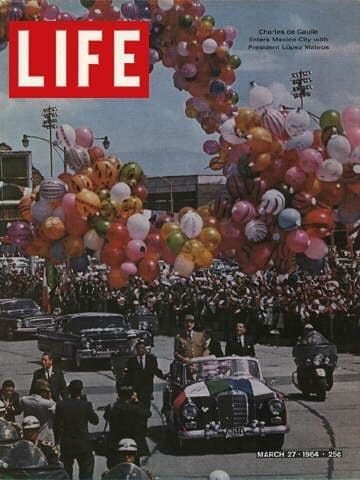 Pg… 22 The G.O.P. Heads West: Oregon and California are Next Up on the Primary Trail and the Big Fights Shape Up. Special Report by Robert Ajemian

Pg… 23 Letters to the Editors

Pg… 32 Verdict on Jack Ruby: Violence, Froth, Sob Stuff?but was Justice Done in Dallas? A Complete Report on the Trial by Sybille Bedford

Pg… 39 How to Milk a Seal: Scientists Seek Answer to Nutritional Riddle in Seagoing Mammals. By Alicia Hills

Pg… 45 Ezra Pound Speaks Out: In Exile in Venice the Aging Poet Contemplates a Trip Home and Tells Why. By Jordan Bonfante

Pg… 54 The Greatest Story Ever Told: A Reverent Film About the Life of Christ. Photographs by Eliot Elisofon

Pg… 80 Unbeatable Gambler: A Math Professor's Foolproof System for Winning at Blackjack Makes Him the Terror of the Gambling Casinos. By Paul O'Neil

Pg… 92 A Supreme Souffl?: How to Cook It and a Meal that Goes with It. Part III of LIFE'S Great Dinners Series