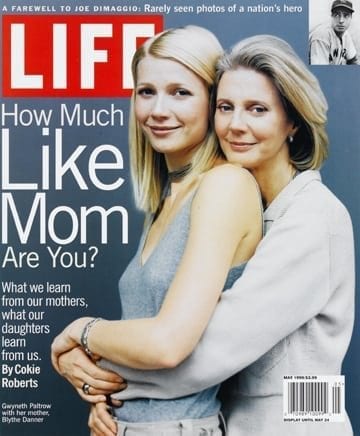 LIFE Magazine May 1999 How Much Like Mom are You

Pg… 14 Letter: Readers weigh in on leprosy, teenagers, smoking debs and do-it-yourself funerals. Plus, a note on aid to Honduras.

Pg… 18 Contributors: The writers and photographers who help create LIFE.

Pg… 30 LIFE Around the World: One family's harrowing flight from Kosovo. Photographs by Tyler Hicks.

Pg… 46 Like Mother, Like Daughter: How I learned the meaning of women's work, by Cokie Roberts. Plus: From a scene-stealer named Gwyneth to a firefighter named Erika, they follow in Mom's footsteps, Photograph by Jason Fulford.

Pg… 62 The Dump Detective: This Santa Fe sleuth is a litterbug's nightmare. by Vanessa Bush, photograph by Jason Fulford.

Pg… 72 L.A. Underground: What does it take to dig a subway tunnel? The Snadhog knows. by Charles Hirshberg photograph by Ken Karagozian.

Pg… 86 Zoo School: A Cincinnati academy where the sunjects range from aardvark to zebu. by Geoff Williams photograph by Teru Kuwayama.

Pg… 94 Breakfast in America: A nation sits down to the day's first meal. Photograph by Benoit Peverelli.

Pg… 100 Here's to You, Joe Dimaggio: Rare photographs of a public hero who never relinquished his privacy.