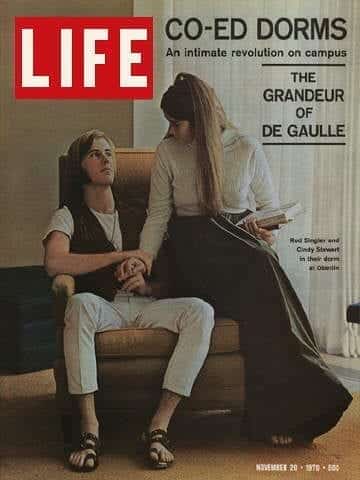 Pg… 32 Co–Ed Dorms: An Intimate Campus Revolution: Colleges Across the Country are Liberalizing Living Arrangements Among Boy and Girl Students. At Oberlin the New Arrangements are a Marked Success. Photographed by Bill Ray

Pg… 42 Ode to the Man Who Was France: The Death of General de Gaulle. By Romain Gary

Pg… 50 The Isolation of a King: A Visit with Jordan's King Hussein After the Bloody Civil War in His Country. By Jordan Bonfante. Photographed by Pierre Boulat

Pg… 57 Who Painted Those Keane–Eyed Kids?

Pg… 58B Meet Shaky, the First Electronic Person: The Fearsome Reality of a Machine with a Mind of Its Own. By Brad Darrach

Pg… 121 For a Part in "Little Big Man," Hoffman Puts on a Century or so with the Help of a Makeup Artist. Photographed by Ernst Haas

Pg… 12–20 Departments: Reviews: Harold Clarman on Lewis Mumford's Despairing Survey of Our Life with the Machine

Pg… 26A Departments: Letters to the Editors