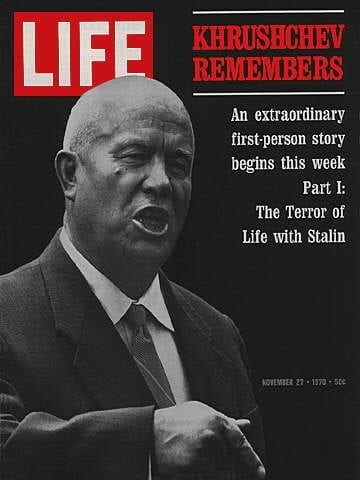 Pg… 30 Part I of an Exclusive Four–Part Series Khrushchev Remebers: The Former Soviet Premier, Now in Retirement, Looks Back to the 1930s to Give a Vividely Detailed Account of Life in Stalin's Terror–Ridden Inner Circle. A Unique Historical Document Illustrated by Previously Unpublished Photographs

Pg… 41 Portrait of a Deadly Pinwheel: A Storm that Killed Hundreds of Thousands Ravages East Pakistan

Pg… 46 Rarities of Ethiopia: In the Harsh Uplands of an Ancient African Kingdom, Some of the World's Scarcest Animals Struggle Against Extinction. Photographed by Bill Ray. The Losing Fight for Game Parks, by Michael Mok

Pg… 80 It's Knickers Sans Droop: Chic Though Sheathed from Neck to Knee

Pg… 85 What Would You Do in a Fix Like This?: An Expert Conducts a Seminar in Surviving Emergency Situations. By Richard Woodbury

Pg… 4 Departments: The Presidency: Fifty Years at 1/20th of a Second. By Hugh Sidey

Pg… 12–24 Departments: Reviews: The Trouble with Political Movies, a Review by Richard Schickel