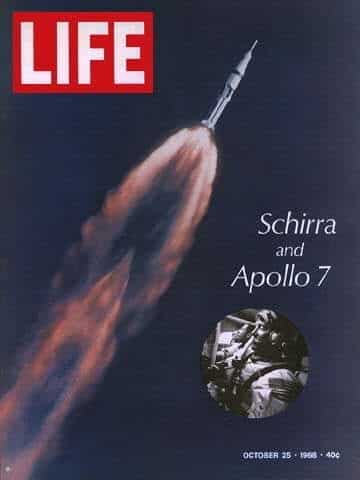 Pg… 4 The Presidency: "Check it with Hopkins." By Hugh Sidey

Pg… 6–24 Reviews: Theater: "The Man in the Glass Booth," Reviewed by Tom Prideaux

Pg… 26A Letters to the Editors

Pg… 26B The Feminine Eye: The Loony Humor of the Yippies. By Shana Alexander

Pg… 30 Schirra Shoots for Three: Apollo 7 Gets Off to a Near–Perfect Orbit Commanded by a Blithe Veteran of Space Who Says: "Levity is Appropriate in a Dangerous Trade." On the Cover of this Issue: Apollo 7 in the Moments After Lift–Off; Inset, Cunningham, Eisele and Schirra in a Training Capsule

Pg… 40 On the Newsfronts of the World: In Mexico, Burst of African Energy. Two Brave Russians Defend the Right of Dissent

Pg… 42A Editorial: A Preference for Nixon

Pg… 57 Modern Living: Happy 40th, Mickey. The Famous Mouse is More Popular than Ever on His Anniversary. By Ann Bayer

Pg… 66A Theater: Gaudy Tragedy of a Black Champ: Broadway has a Spectacular Hit on the Life of Jack Johnson. And Muhammad Ali Says, "This is About Me." By Pete Hamill

Pg… 70 The Mob: Gallagher Continued: The Congressman and the Salad Oil Swindler

Pg… 74 The Vote from Vietnam: How Our Men in the Field View the Candidates and the Issues. By Don Moser

Pg… 87 Books: Anthony Burgess is the Eclectic Author of His Own Five–Foot Shelf. By Jim Hicks

Pg… 99 Elusive Long–Horned Beauty: The Giant Sable Antelopes of Africa are a Vanishing Form of Wildlife