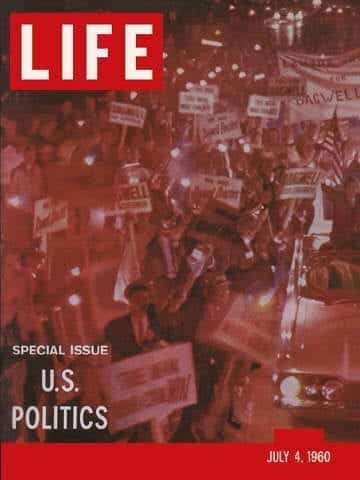 Pg… 12 In some ways is a pageant of unchanging ritual. It covers tumultuous torchlight parade would have have to add horses and carriages 100 years ago, but the excitement is the same. So we open the issue with color pictures in which you can see, feel, practically smell the time–tried ways by which votes are sought. We title it: Politics – A Sight to Behold.

Pg… 22 The highest of all prizes to which all this leads is a unique and awesome office. With the help of three living men who have held that office, we sum up its spirit in: The Presidency.

Pg… 24 Right now, the destinies of a few men who aspire to the presidency are a suspenseful moment of decision, and the pre–convention campaign is photographed in its fiercest hours. We are with the hopefuls, and the two who lead their respective packs. We get into the secret confabs, where movers and shakers try to make the last–minute deals–and we get into the last–minute squabbles. Along the way we give you a scorecard you will find essential when the Democratic convention starts and give you last–minute maneuvers as: Top Men Roll on to the Conventions.

Pg… 32 Sure to come up in convention and election is an appeal to the nation's mercenary impulses. The degree to which voters will – or should – care about money issues is a subject for a searching discussion in our editorial: Pocket Book Patch–And Economic Issue.

Pg… 35 For the convenience of next week's convention fans we present a pictorial guide to Los Angeles Sports Arena with names and locations of the key Democratic delegates. And we follow it with an eye opening map of what American geography really looks like to the professional vote seeker in the: Democratic Ring.

Pg… 46 For sheer drama, the high points in America's endlessly colorful political decisions are hard to beat – from George Washington's Crossing of a river (not the Delaware) to F.D.R's debarking from a Ford trimotor to accept his first–term nomination. The greatest of these moments are presented in a gallery of specially commissioned paintings called: The Pomp and Glory, Drama and Deals

Pg… 59 Speaking of nominations, past and present, there is one man so obviously unsuited for the top job in the light of present–day. Political techniques that LIFE staff writer Robert Wallace has, tongue–in–cheek, written of his hopelessness: We Can't Nominate Him.

Pg… 68 Turning from the top job to the bottom one, there is the grass rooted (or concrete paved) base of all political activity in campaigning, from dogcatcher up: The Lowly Precinct, Where It All Begins

Pg… 74 Higher on the ladder, on state and national level, we come to an energetic bundle of brains, beauty and political poise who in more ways than one will bear watching, by the other women and by men: The Lady from Minnesota.

Pg… 89 In lighter mood we turn to banners and funny hats, lanterns and torches, and campaign buttons of the past century. With color and with a loud hurrah show them all: Gay Campaign Paraphernalia

Pg… 95 But we had to come back to the realities of the world today, a world whose sudden international upsets are causing the voters to want to ask – and to ask – tough questions. One of the wisest political reporters in the land, Arthur Krock, tells why and how: This Year, Everybody Cares.

Pg… 99 With an eye to the politician of the future, we close happily on the Northwestern's mock convention where: Collegians Yuck It up : Cover – Cornell Capa from Magnum