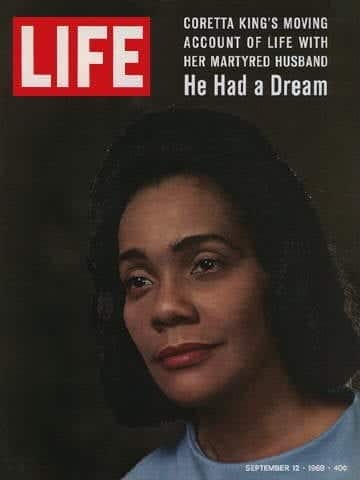 Pg… 4 The Presidency: The Day the Washing Machine Broke. By Hugh Sidey

Pg… 26A Letters to the Editors

Pg… 26B War Over the Peaceful Atom: As the Fear of Contamination Grows and Public Protest Rises, the Bright Hope of Nuclear Energy as a Major Power Source in the Immediate Future Appears to be Fading

Pg… 34 On the Newsfronts of the World: The Rock Showed Them Every Time. Mayor Lindsay Among the Bronx Cheerers. A Not of Hope at the Governors' Convention. Ho Chi Minh Dies at 79

Pg… 42 On Safari into the Past: Richard Leakey Attempts to Outdo His Famous Parents by Finding Evidence in a Wild Region of Kenya for the Earliest Man. "This is My Area?I've Staked it Out." By Richard B. Stolley. Photographed by John Reader

Pg… 54 He Had a Dream: Mrs. Martin Luther King Jr.'s Own Story of the Years of Struggle, Hope, Success and Foreboding. The First of Two Extracts from a New Book by Coretta Scott King

Pg… 70 New Lives for Old Churches: There are Stained Glass in the Living Room and Groceries in the Sanctuary as Derelict Houses of Worship Take on Secular Duties. Photographed by John Dominis

Pg… 77 Sports: An Old Pro Who's Too Mean to Quit?That's Pancho Gonzales, Still Angry and Playing Tennis at 41. By Marshall Smith